I already have one of those (had to import from America years ago), trouble is they can be easily confused by in-circuit devices still. I had to order a few capacitors for trying that fix as 200uf is not a common value here. I also found an ebay seller with giant vintage K50 2000uf/50v capacitors. Not quite the same model but the same size and screw fitting.
Вернуться к началу

Bridged all the capacitors in the area, no change. I did discover one was totally dead though. I put a known good one in (I didn't have 20uf of high enough voltage, so used 2x10uf 160v in series for the test) after removing it but still no change. Removing the old ones is surprisingly difficult due to the thick varnish everywhere.
Вернуться к началу

My 1975 machine arrived, this is completely different to my other machines inside! PSU is like the schematic, there are those big crazy wire modules in the base under the keyboard, PCB set is different. Seller was very honest, sold as 'does not turn on' - I found the power wires weren't secure in the plug, and the sealant on screws from the factory shows it has probably never been opened. One PCB retainer stud is broken on the board cage which I found rolling inside the base, they're plastic melt-fit and it should be easy to replace somehow, causes the display PCB to lean as there is no support. I can see no other damage at all, this part may have been caused by shipping - superglue may even be sufficient. All of the anti-tamper sealant on screws for parts inside the machine is intact too, and it came with the original service manual with block function descriptions. I have not seen this manual online and will definitely be scanning it to share with the documentation sites.

I have removed the power supply, taken the capacitor out of the filter, did some basic safety and short tests and then powered it up. Have not checked all voltages yet but -27v is almost perfect, +100V is definitely working. Power supply makes a 'fizzing' noise like a CRT flyback. It doesn't seem to get worse and the voltages stayed stable - not sure if this is a problem, the ones in my newer machines run silent. So far though, this is much better than I expected. The wiring in the filter/etc is of higher quality than in the newer machines, thicker insulation and wires.
Вернуться к началу

Strange things with the 1975. Voltages kept disappearing or slowly changing, after a while they all stabilised. The machine initially wouldn't do anything, but now starts up with 60000000000000 (sometimes negative or with 0 at the 1st), the negative sign button works but pressing anything else causes the display to turn off and most of the voltages drop out! Very strange, the -12v and +6v just die and all the nixie tubes flicker and go out just like when you turn the power supply off.

Something very interesting I noticed from rapid re-testing - when you press a key JUST before the displays go out you can see that it did register. So if I have 14x 0 on the display and press 9, that 9 will show up for a fraction of a second before the voltages collapse.

I'm wondering if this is actually a case of bad capacitors and power supply draw, although the -27v is completely solid. I had a similar fault on one of the newer machines but that never powered down anything, it just crashed. Perhaps some component is turning into a huge voltage sink? The supply does not make the buzzing/fizzing sound when everything is connected together, and while displaying the initial row of zeros all the voltages are stable and within spec. Very strange fault. One of the nixie tubes may have a failed decimal dot, but with the current behaviour it is hard to say for sure and could be anything.

I also spent more time with the 1977 PSU - disconnected the transistors that feed the transformer - both have good -28v output. I had wondered if one was dead and the readings were misleadng since theres continuity between the inputs to the coil. It seems like there's an initial surge when powered on that very very quickly drops to nothing from the affected dead voltage outputs. Struggling to understand this one, is it some kind of protection circuit kicking in? I didn't think these were advanced enough to have anything like that.
Вернуться к началу

I've scanned the technical description manual that came with my 1975, to access the file-
username: scans
password: archive

Finally the 1977 PSU is fixed, I put it on hold for a while. Complete re-cap brought it back to life. I had to use vertically mounted axial capacitors due to difficulty finding parts with the correct uF ratings. Rated voltages were impossible to match, all are higher which is safe, PSU is now completely stable and adjusted to -27.04v measured at the PCB rack. 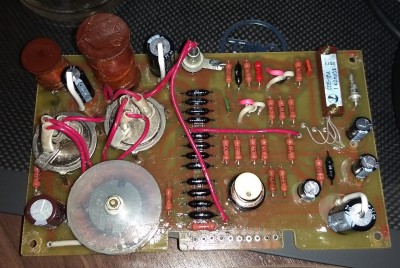 I thought the machine was finally restored - but then I noticed that actually the arithmetic has failed, pressing the minus key at any time results in a random number. Using board swapping on a working machine, this PCB is faulty: 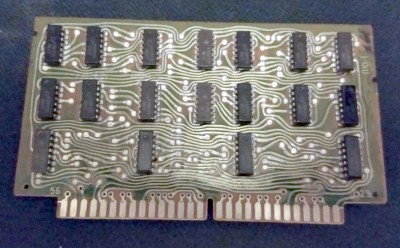 I will update when the problem chip is identified.
Вернуться к началу

I was forgetting to reset the calculator after power-on....

Something interesting, I now have 3 fully working machines, they all misbehave in slightly different ways if you try to operate them before pressing CK on power. If you do confuse them pressing something else, you must press = and then CK after to reset. I assume from power-on the chips being used to store the working calculation value can be in an unknown state.

The really nice grey one is next for cleaning / reconditioning. The power supply on that one is working perfectly fine so I won't be touching that, it's really just a cleaning job and then fix the decimal position plate - it got caught on buttons at some point when the lid was being fitted which broke the adhesive on one end. Trying to remove to re-stick it perfectly will damage the very thin metal which would be really hard to straighten again, so I will be injecting some form of rubber based adhesive into the gap.

The 1975 model is a struggle, different hardware so I can't swap parts to find the fault. It reliably powers on now but trying to enter any number or perform any calculation results in a nearly immediate crash - you can just see the pressed number for a fraction of a second before the entire display powers down, almost like a computer crashing.
Вернуться к началу

Servicing a spare PSU I obtained, it worked but had been damp stored, track corrosion at the back - corrosion repaired in below photo. I had to totally remove the PCB from the wiring as corrosion affected the base of the wires, they need to be cut back a few mm. 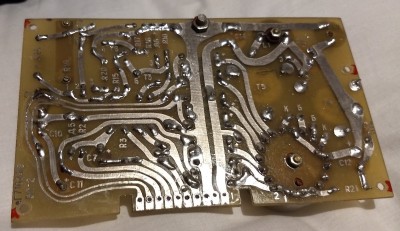 Checking inside the filter, I found this ugly work: 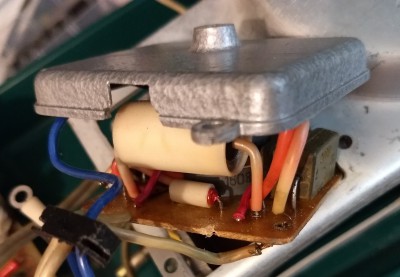 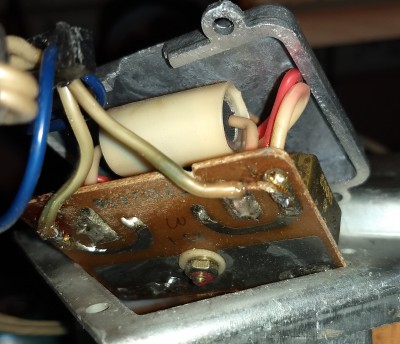 220v input cables not fitted correctly, cuts made in the PCB so they can route to the top, wires turning dark where they were being squashed against the filter case. Dangerous. Wires from filter to switch and fuse also darkened where they pass through the rubber grommet. I thought this was just discolouration from the black rubber before and have seen it on all my power supplies, but examining the cores in some last year I found that these wires are subject to heat damage over time and it is a good idea to replace them.
Вернуться к началу
Ответить
32 сообщения